Valid arguments on the Religion of Nehru-Gandhi family? 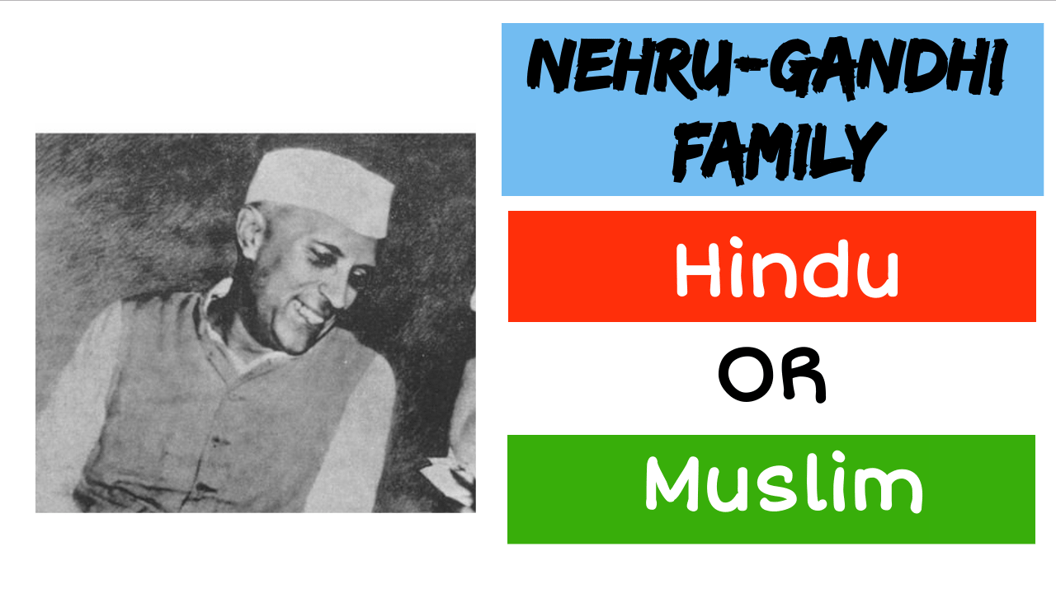 Sardar Vallabh Bhai once commented, “There’s only one nationalist Muslim in India: Jawaharlal Nehru.” As mentioned in the book – ‘Rewriting Indian History‘, by Francois Gautier. For the previous 10 years or so, this has become one of the most talked about the question that ‘What is the actual religion of Nehru-Gandhi Family – Hindu, Muslim or Anti-Hindu’, there are many more questions like ‘Who was Gangadhar Nehru?’, ‘Gangadhar Nehru and Gayasuddin Ghazi Khan were the same characters or not? ‘Real name of Gangadhar Nehru‘, ‘Religion of Feroz Khan & India Gandhi’, ‘Family Chart/tree of Nehru family’, ‘Were Motilal Nehru, Jawaharlal Nehru, Indira Gandhi Beefeaters?’ and much more similar and related questions?

I am not here with any pre-judgemental thought or against any side, but based on the facts and incidents, I would like to genuinely convey a point or two.

At first glance, the question arises, why the hell this question suddenly surfaced around 40-45 years after the death of Pandit Jawaharlal Nehru, and who was the person or organization which dropped this BOMBSHELL. Not only a Bombshell it was heartbreaking or an eye-opener for many, few believed that it was a part of the conspiracy to malign Nehru-Gandhi family.

So, who throw this piece of information, suddenly appeared?

Some Books throws light on the matter

Though I have not read this book so couldn’t claim the correctness of this piece of information from M.K. Singh’s book

There is no other known authentic source of information available as of now, by which this could be proved that – Nehru’s ancestors were Muslims/Mughals and because of fear of getting killed by Britishers, they changed their name to Hindu names and moved to Agra from Delhi and later continued with those names.


It is said that “one can hide the identity, but acts and deeds reflect the real character of an individual”, if we go by this, then Nehru-Gandhi family’s deeds may surely indicate something.

How do you see below-mentioned facts, which probably indicate something substantial – if seen by putting together the facts and by seeing the co-relation between them:-

Acts & deeds of Nehru Gandhi Family, which discloses their religion

1 . Partition did not pain Nehru

It seemed that Partition of India didn’t pain Nehru, but he was the happiest man after grabbing the power and becoming first Prime Minister of India and he was fine with United Hindu majority country, India divided into Two Muslim and one secular nation. Gandhi deeply pained by seeing broken India, initially Gandhi was resistant to divide the country but under influence of Nehru finally, he gave up and paved the way for Nehru’s desires.

Nehru’s disturbing attitude (or anti-national attitude) towards Muslim-majority and Muslim ruled areas of divided India, which includes Kashmir, Jaunpur, and the State of Hyderabad.

His entire idea of secularism was more inclined towards anti-Hinduism than anything else.

4 . Nehru once said “I am an Englishman by education, a Muslim by culture, and a Hindu merely by accident“

5. Nehru’s civil code, only for Hindus

Nehru’s concept of the Uniform Civil Code was such that this will be applicable on Hindus and stated that – “Now we do not dare to touch the Muslims because they are a minority and we do not want the Hindu majority to do it. These are personal laws and so will remain for the Muslims until they want to change them. We do not wish to create the impression that we are forcing any particular thing in regard to Muslims’ personal laws.”

Self-proclaimed ‘Progressive’ Nehru did not see any problem with polygamy and triple talaq.

When Indians were in pathetic condition because of post-independence multiple problems, Nehru brought Haj Committee act, 1959 that allowed Haj Subsidy when Muslim Pilgrims travel to a distant nation – Saudi Arabia with huge expenditure.

But at the same time, there was no subsidy for Hindus for Char Dham Yatra within the country, which constitutes 85% of the population.

7. Nehru tried to destroy the Sanatan Hindu Dharma by its roots

As mentioned on this Blogspot website – As per Gurudev Dr. Kateswami in Weekly Sanatan Chintan, 23rd August 2007, Issue 27 –

“Nehru deserves to be punished in hell till the end of Kaliyuga for his great sin of destroying manuscripts, scriptures, and books that depicted Hindu progress and affluence!”

This is being referred to the JNU in the line of Oxford & Harvard Universities, and in the course of formation of JNU

Education is of the top priority for any government, specifically for the country which just became independent after around 200 years of foreign rule. To lay a strong foundation to build the future of coming generations, it is very important that how education policy framed, how history and culture books to be written and to chose the right person whom this responsibility should be given.

The man, who was made first education minister of independent India – “Maulana Abul Kalam Ghulam Mohiuddin Ahmed bin Khairuddin AlHussaini Azad“ was born in Mecca (Saudi Arabia), his grandfather died during Sepoy Mutiny (1857-58) by Britishers (similar to Nehru’s grandfather, who left for Agra during same period). He along with his family settled in Mecca, his father’s name was – “Maulana Sayyid Muhammad Khairuddin bin Ahmed AlHussaini” and mother’s name was “Sheikha Alia bint Mohammad”, who was the daughter of a rich Arabian Sheikh and scholar from Medina.

Later how Indian textbooks took shape, we all know this. Read two most brilliant books on this topic – (Must-read for every Indian)

Though not everything mentioned in this book by P.N. Oak may not be claimed as correct, P.N. Oak had done the great work to highlight gaps in the way Indian History was written. His most of the books are available in English and Hindi-

Manipulation with History by Govt. Machinery

The biggest harm Nehru did to Hindu in India, was to propose a Socialist, Secular approach and mask this ideological aspect. God knows if Nehru was really a Muslim, then this should have been the best policy to do anti-Hindu, pro-Islamic acts in the name of secularism and cover-up his Islamic character.

This image shows the condition of Hindu’s in India as a third-grade citizen, after the seventy-year rule of Nehru-Gandhi family:-

10. Where Nehru’s heart lies: See how he named Monuments

In most prominent part of Delhi or Lutyens Delhi, we have all these high profile roads named after Muslim dynasty rulers, who all were responsible for the very high order of cruelty, forced conversion, everywhere destroying the Hindu/Jain/Buddhist religious places. Prominent roads are named after Aurangzeb, Babar, Humayun, Akbar, Shajhan, Lodhi, and Tuglak Road. Less important roads are named rarely after other Hindu rulers.

While naming the landmarks, legendary Indian figures have been overlooked.

Rarely you might have seen the roads in the name of Chandragupta, Vikramaditya, Krishnadev Rai, Maharana Pratap, Hemu, Rana Sanga, Porus, Harshvardhan and other prominent Ancient Indian historical figures.

Out of these roads, few have been changed recently by NDA government led by Narendra Modi.

11. Symbolism of naming Railway stations across the capital of India

Nehru was a Beef-eater, as claimed by Rajiv Dixit by referring to many authentic sources in his video.

Other sources also confirm this.

Be learned, that Hindus don’t eat Cow’s meat due to religious reasons and certain belief system.

There are many stories about Indira’s secret love life, something related to that was written in this book. It says that the article was originally supposed to be a part of Mathai’s book, ‘Reminiscences of the Nehru Age’ but for obvious reasons, at the last moment, it was left out of the book and never published.

Very sensitive & extremely interesting topic – ‘She’ of this book, which narrates the secret love/sex relationship between Mathai & Indira. The transcript of  “she” chapter is available on the internet, just google it.

In this so-called left-out part ‘she’, Mathai mentioned the India Gandhi’s love for Veal (Meat of young calf), a kind of beef. He also mentioned that Indira not even read Ramayana and Mahabharata ever. Mathai also mentioned in that left-out book that once Indira said that “she would not like to get married to a Hindu man”.

This book is available as a free download here.

Another writer – Katherine Frank also mentioned their affair in the book “The Life of Indira Nehru Gandhi”.

It’s been reported by the former diplomat, congressman, and Union minister Mr. Natwar Singh in his memoirs, that during an official visit to Afghanistan along with then PM Indira Gandhi in 1968, he accompanied her as an IFS officer in duty, he states in his book that – after having completed the day’s long engagements, Indira Gandhi wanted to go out for a ride in the evening. After going a long distance in the car, Indira Gandhi wanted to visit Babur’s burial place located there, though this was not included in the itinerary. The Afghan security officials tried to dissuade her, but she was adamant. In the end, she went to that burial place. It was a deserted place. She went before Babur’s grave, stood there for a few minutes with head bent down in reverence. Natwar Singh stood behind her.

When Indira had finished her prayers, she turned back and told Singh “Today we have had our brush with history”. It is worth noting here that Babur was the founder of the Mughal Dynasty in India, probably she was referring to History as from Babur only Nehru-Gandhi dynasty have descended.

Another point should also be noted here that, in Afghanistan, there is another very important grave located from the Indian perspective, this is of the famous Hindu king – Prithvi Raj Chauhan. Being Indian, Indira Gandhi should have visited Prithvi Raj Chauhan’s gave first, but there was something special in Babar, which made sense for her to take time out from her extremely busy schedule and paid an unofficial visit at Babur’s burial place and pray with head bent down. It is self-explanatory, isn’t it!

This was a huge incident captured by Natwar Singh in his book, there is no doubt about its authenticity.

14. Rajiv Gandhi’s public confession, that he is not Hindu:

Rajiv Gandhi knowingly or unknowingly did it thrice, it seemed quite natural and spontaneous reaction from him. Twice he said it clearly with the direct meaning and once it was implied.

For him, the maximum glory was witnessed by the country during the Mughal era, of course, for him the Mughal’s acts of temple destroying, the murder of masses, hundreds of thousands forced conversions seemed to be fine.

If you find this article meaningful then it is expected from you to spread this to your surrounding as an eye-opner informative aticle, and if you think any correction is required – please share your feedback in comment box.

If you have came across any other valuable data on this matter, do let us know.

Hope you have got the message.

So if someone is trying to make a fool of you, thinking that you are a seasoned fool veteran, It does prove one thing for sure, that insatiable greed for power has raised the bar of shamelessness and immoral acts so high, that even the Himalayas seem to be a small rock in their comparison.

One should feel proud by naming his true religion, whatever it is.

One must remember that – You can not fool people, forever!